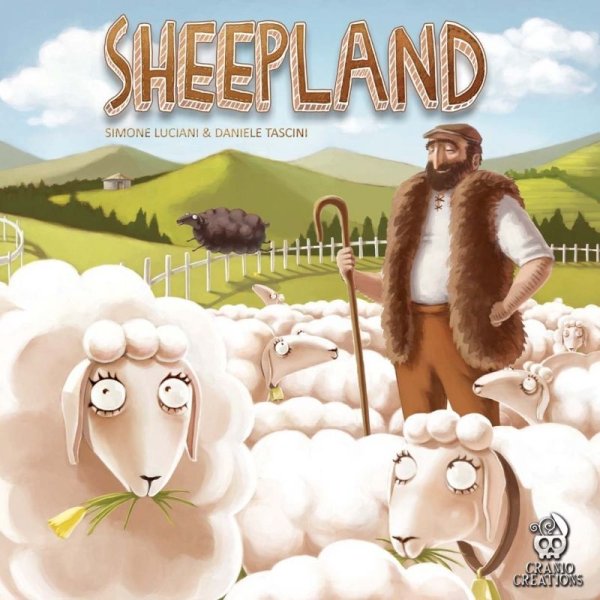 g> Sheepland is set on the beautiful island of the same name, where for centuries the population has taken care of sheep. While inexplicably working in the same field, two to four shepherds try to move sheep into the right areas to score points. During a turn, you must take three actions, chosen from these possibilities: Move your shepherd Move one sheep Buy one terrain tile You must move your shepherd at least once during your turn, and you can't take the same action twice in a row without moving the shepherd between. Six different terrain types are available, with five tiles of each type and increasing costs (from 0 to 4 dinars) on those tiles. When you buy a tile, you're not claiming land on the game board, but rather investing in that type of landscape as that's where you expect the sheep to end up grazing. At the end of the game, you score 1 point per tile of a terrain type for each sheep in a region of this type; you also score for coins still in hand. The map on the game board shows regions separated by roads: three regions of each terrain type for a total of 18 regions. Numbered "rest stops" lie along the roads, with each rest stop between exactly two regions. Shepherds move from one rest stop to another, with the first movement being free and all others on the same turn costing 1 coin. When you buy a terrain, you can purchase the top tile of either of the two terrain types next to your shepherd. When you move a sheep, you move one sheep from a region adjacent to your shepherd to the other region adjacent to that piece, i.e., you lead the sheep across the road to a greener pastures – well, greener for you, if all goes well. Each time you move the shepherd, you place a fence in the rest stop from which it started moving, making that location off-limits for the rest of the game. During the game some regions become inaccessible, and if they are full of sheep, naturally there's a rush for the tiles. The lone black sheep in the game, which is worth two points, serves as a semi-random element, possibly moving to an adjacent region each turn while still being movable by shepherds as long as it's not fenced in. After twenty fences have been placed, you end the round so that all players have the same number of turns, then you count up the points.