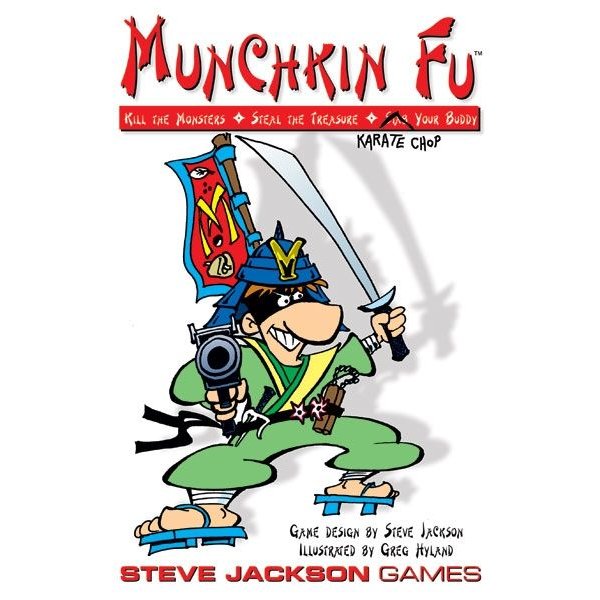 g> If you loved Munchkin... look out. Here they come again. "I'm a Ninja with the Dragon Tooth Katana!" "I'm a Monk with the Sai of Spleen Mangling. Fear my Drunken Monkey Kung Fu!" "I'm a Yakuza with a gun. Run away!" The Munchkins are back! Now the game is chop-socky Hong Kong action. The characters are Samurai, Ninja, Yakuza, and Monks. The foes are mooks, demons, and assorted bad guys from all the worst martial arts films you've ever seen. Collect treasures and learn new styles to build up your character's powers. Kill the monsters, take their stuff, and be the first one to 10th level! Created by Steve Jackson (I). Munchkin Fu is completely compatible with the entire Munchkin line. Part of the Munchkin series. Munchkin is a satirical card game based on the clichés and oddities of Dungeons and Dragons and other role-playing games. Each player starts at level 1 and the winner is the first player to reach level 10. Players can acquire familiar D&D style character classes during the game which determine to some extent the cards they can play. There are two types of cards - treasure and encounters. Each turn the current players 'kicks down the door' - drawing an encounter card from the deck. Usually this will involve battling a monster. Monsters have their own levels and players must try and overcome it using the levels, weapons and powers they have acquired during the game or run away. Other players can chose to help the player or hinder by adding extra monsters to the encounter. Defeating a monster will usually result in drawing treasure cards and acquiring levels. Being defeated by a monster results in "bad stuff" which usually involves losing levels and treasure.