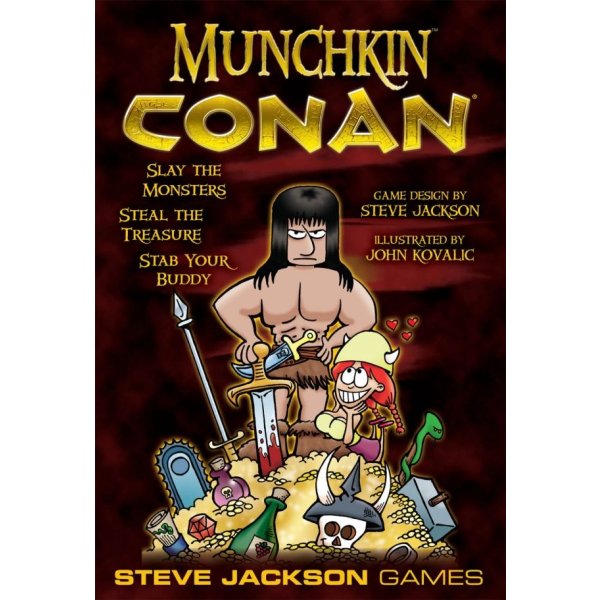 g> Munchkin Conan is a 168-card core set in the Munchkin family of games, with 101 Doors and 67 Treasures. Unlike other core sets, it lacks unique card backs, instead using the standard card back from Munchkin. The included Munchkin-head d6 is yellow with dark red print. In Munchkin Conan, Robert E. Howard's epic hero gets the full Munchkin treatment. Play a Cimmerian Warrior or a Stygian Wizard! Wield the Sword of the Phoenix and poison your foes with Black Lotus! Slay Thoth-Amon's minions, Pict raiders, and abominable monsters, and hear the lamentations of their women! On many of the cards, the publisher provides context by including relevant quotes from Howard's work. Munchkin Conan has a new type of card – birthright – and the mechanisms are similar to that of classes and races in that you can have only one in play at a time; you may discard a birthright at any time but may play one only on your turn or when you first get it. The Munchkin Conan core set comes with two birthrights: "Noble", which allows you to have an extra Comrade (see below), and "Barbarian", which allows you to ignore all "Usable By" and "Not Usable By" restrictions on items. There is no birthright analogue to "Super Munchkin" or "Half-Breed". Speaking of races and classes, the races in Munchkin Conan are "Kushite", "Zamoran", "Cimmerian", and "Stygian"; when playing a blender game, they are all considered to be human unless the other sets have non-human races. The classes are "Cleric", "Thief", "Warrior", and "Wizard", and are identical to the fantasy Munchkin classes with the same names. ВНОСИТЕЛ: ФАНТАСМАГОРИЯ ООД www.fantasmagoria.bg