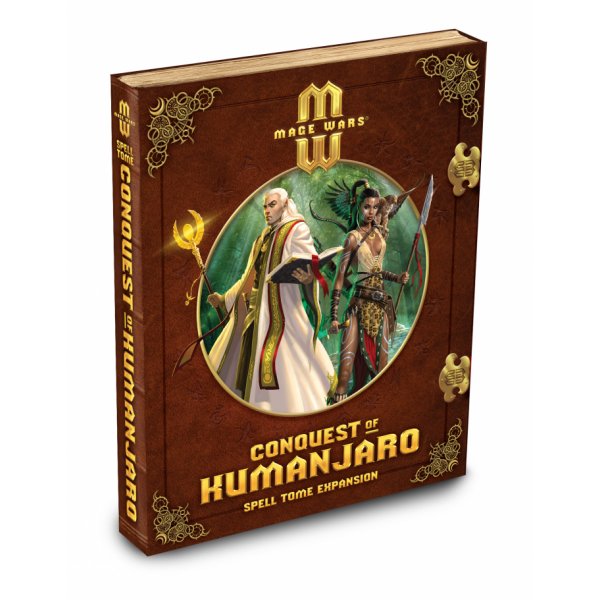 g> In the Mage Wars: Conquest of Kumanjaro - Spell Tome Expansion, players can wage their own matches as a Priest of the Order of Malakai or as a Beastmaster of the Johktari, using new ability cards for each, and a trove of new spells from all the spell schools. The Johktari Beastmaster is a fierce and proud hunter, defending her people's lands against invaders. She is a skilled archer and has the Ranged +1 trait for all of her non-spell ranged attacks. She can also sprint quickly across the vast savannahs running swift as a Cheetah using her Sprinting ability which gives this Mage the Fast trait. If these abilities weren't deadly enough, the Johktari Beastmaster can use her Wounded Prey ability to mark and relentlessly pursue wounded prey, working with her animals to finish it off. The Priest of Malakai is a crusader against non-believers. He seeks justice and relentlessly pursues enemies with Holy retribution. The Priest is blessed with the burning light of Malakai, and his basic melee attack deals light damage. In addition, once per round, if the Priest attacks and damages an enemy creature with any attack which deals light damage, the creature may burst into flame via Malakai's Fire. To round out the divine might of this Mage is his Holy Avenger ability. A few of the creatures in this expansion, such as the Guardian Angel, are ready to defend their Mage at any cost and thus introduce the Intercept ability which allows them to jump in the way of ranged attacks if they are on guard. The set also introduces three new conditions: Bleed, Stuck, and Tainted.